The .22 Magnum (.22 WMR) cartridge was introduced by Winchester in 1959. A performance improvement over the .22 long rifle, it was immediately trendy if not popular. Gun makers responded promptly with magnum offerings in their rimfire platforms.

Great Western catalogued the Frontier in .22 Magnum in 1960. Pictured in the catalog was a line drawn revolver marked ’22 MAGNUM’. Great Western Arms was in its last years though, going defunct, and it doesn’t seem a Frontier with the .22 Magnum rollmark ever got built. None have been observed.

There are, however, several instances of .22 Magnums with ‘.22 CALIBER’ rollmark that occur after serial GW21000. These would have been built in 1960 and later, thru 1963. I’ve owned two of these examples and examined a third. I was satisfied of their originality. They had not been reamed out from .22 long rifle.

Notwithstanding the absence of an example with .22 MAGNUM rollmark, it is almost conclusive that Great Western built revolvers in this caliber. Factory original .22 Magnums will adhere to the pattern I have described. They will be very high serialed, show no evidence of rechambering, and accept .22 Magnum cartridges.

Great Western’s inability to tool for a new rollmark in its last years is fairly easily explained. There really was no Great Western factory at that point. EMF had a capable machinist assembling Great Western revolvers from old parts inventories. Under these circumstances a .22 Magnum would be easy to build, were there orders to fulfill. But there would be no impetus to tool up a new caliber rollmark die.

I dare say, if .22s with late serials are encountered they are more likely to be .22 magnums than they are to be long rifle. There do seem to be examples of high serial, .22 convertibles.

Production Notes: Legitimate factory examples will have high serials, probably above GW21000. Those Great Western .22’s that chamber magnum but have serials below say GW20000 are disqualified by virtue of manufacture date. They were built before 1959, before .22 Magnum ammunition was available. Thus to shoot .22 magnum ammunition, they had to have been rechambered.

Build / Construction: Over the years the common architecture for a .22 mag revolver included counter sinks on the cylinder face to recess the case rims (Ruger Single Six, Colt Scout). Great Western’s .22 Magnums do not have this. Note also, .22 magnum cylinder chambers have throats, where the traditional rimfires like long rifle are straight walled and do not have throats. The difference is visible to the naked eye, and can be viewed by looking into the cylinder chambers. 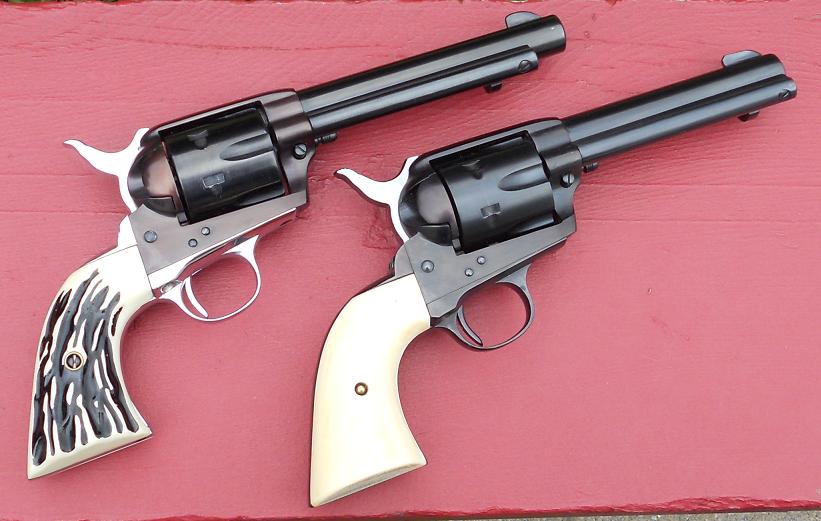 These two Great Westerns have very high serials, and are among the last built. They are in original condition, and are .22 magnums with the typical ‘.22 CALIBER’ rollmark.