In collector vernacular, a sheriff’s model is a short barreled single action without an ejector.  Colt originally made the Single Action Army in this configuration in the latter 1800’s.  Great Western emulated Colt’s Sheriff’s model with a short factory run of its own in 1954.

Serial Range: Seen from approximately GW290 – GW375 in the Great Western serial range. There have been no Sheriffs models seen with serials any great distance outside this range. Should one appear, skepticism for its authenticity is warranted.

Calibers:  The Great Western Sheriff’s models are probably all .45 Colt.  It does not appear Great Western made anything but .45 Colts until serial GW400 or so.

Barrels:  3 inches and also 3 ½ inches.  The Sheriff’s model is advertised in Hy Hunter’s catalogs over 1954-56.  In those catalogs, these two lengths are expressly offered.  Both lengths have been verified by examples among collections.

The Blue Book makes note of the Sheriff’s cylinder frames having a lower forward corner whose elliptical edge resembles Colt’s more than later Great Westerns.  This is true, but I think merely a reflection of Great Western’s first cylinder frame (rendered by Arwood Co.) being a bit more true to Colt’s details in its external shape.

The GW \ Arwood frame is not so true to the Colt in other ways, and those attributes are seen on the Sheriff’s model.  All the Great Western Sheriff frames I have examined were quite easily discerned as castings, while first generation Colts were forged.  Blue Sheriff’s models consistently show the ‘plum’ oxidizing seen on Great Western’s other, later blue guns.  The ‘plum’ was understood to afflict investment cast frames that were caustic tank blued.  The Sheriff’s models wouldn’t ‘plum’ oxidize if they had been built from a Colt forging.

Simply, there’s just no compelling explanation that makes the ‘Colt frames’ assertion harmonious with a visual, technical evaluation of the Sheriff’s model.  It’s my judgment that the Great Western Sheriff’s models were built like other Great Westerns, with frames provided by subcontractors, in this case Arwood.

Beyond that, note that as the Sheriff’s models were made in the first few months of the company’s revolver production, they often show the imperfections for which Great Western’s early guns are known.  With the Sheriff’s models I often noticed barrels that are over or under clocked a tick from proper sight alignment.  Also, company rollmarks are not applied straight or are sometimes missing.

Due to the short barrel length, the Sheriff’s models use a ‘GREAT WESTERN’ rollmark rather than the typical ‘GREAT WESTERN ARMS CO.’ seen on the other guns.

Barrels may or may not have a serial stamp that matches the rest of the revolver.

Scarcity \ Collectability:  With only 100 or so made, they are very desirable despite some common imperfections as noted.  They are among the most sought after Great Westerns.

Two authentic Great Western Sheriffs models, along with a later shorty Frontier model that has an ejector. 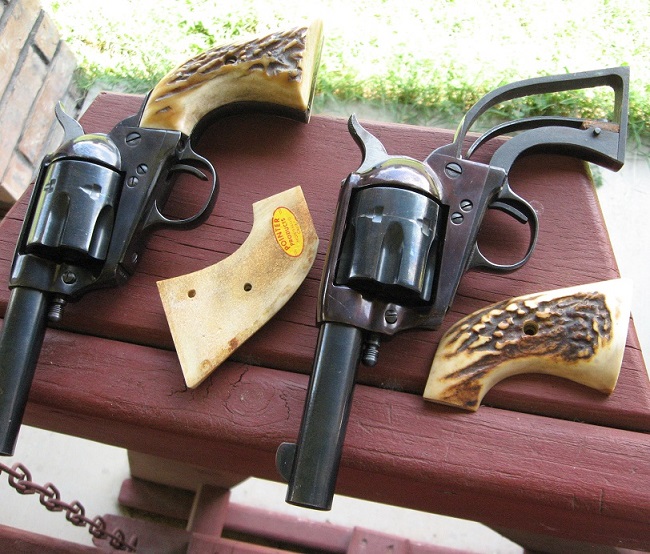 These Sheriff models with factory supplied stags are consecutive, and were made in 1954.