Standard production revolver serials may have a ‘GW’ prefix, but serials are otherwise simply numeric.  Serials ostensibly start at 1, for gun 1, and ascend by order of production to about 22250.

‘GW’ as a prefix stands for ‘Great Western’.  Prefix use in different places on the serial ranges signifies corporate ownerships changes.  Prefix ranges and ownership are understood to be as follows:

The prefix or its absence was mostly an indicator of warranty responsibility.  When FerroCast took control of Great Western in 1956, they declined or say refused to offer warranty repair for revolvers produced under Wilson’s management.  They dropped the GW prefix at this time, which was an indicator that coded the warranty coverage right into the serial number.  E&M reintroduced the prefix at GW19400 so as to code revolvers built under their management.

Great Western revolver manufacturing followed the century old Colt process where all parts were fitted to a frame, with the complete gun then torn back down for finish application.  To identify what parts went back on what frame at reassembly, parts were serialed.  Serialed parts and their locations are:

At times we notice on very original looking guns that some parts lack serials, particularly backstraps.  But generally, Great Westerns can be evaluated in the same way as Colts:  originality is found persuasive when all parts having matching serials.

On all parts, weak strikes, double strikes, and misaligned numerals are common.

The vast majority of revolvers have a single line company rollmark of “GREAT WESTERN ARMS CO” on top of the barrel reading muzzle to frame.

On Sheriffs models the company label is “GREAT WESTERN” so as to fit on the shorter barrels.

On the Deputy models, the barrel rib is affixed where Great Western’s typical company rollmark would be.

Early Deputies, those prior to serial 19000, instead have a two line stamp of:

This is placed on the left side of the cylinder frame, where the patent dates would be on a Colt SAA.

This two line cylinder frame marking has also been encountered on a handful of frontier models in the GW5000 – GW7500 range.

Quite a few Great Westerns have been seen where there is no company rollmark on the barrel nor anywhere else.  While some of these no doubt had generic SAA replica barrels swapped in, perhaps for a repair, others seem to have left the factory with no company rollmark for whatever reason.  Revolvers without company rollmarks occur through the serial range.  A numbers matching barrel is persuasive of factory condition, but a barrel serial may well be absent on some examples that are no doubt ‘factory’.

Briefly, Great Western changed the location of the revolver’s main serial from the bottom, forward of the trigger guard, to the left side, below the cylinder.  The known range for this serial placement is 12913 – 13265.  It’s not known why this change occurred.  Great Western resumed use of the bottom serial by revolver 13279.

When encountered, the T is usually on one of the small front side flats of the trigger guard oval, just below the oval’s junction to the frame.

This T was not a procedural step in Great Western’s manufacturing process.  Rather it was briefly say the proud build mark of an individual assembler in the factory, Toni Ramirez.  The T mark has also been encountered on factory wood grips Ramirez fitted to T marked guns she assembled (eg, revolver with ser. 19347).

Ramirez was an employee of the FerroCast Great Western operation at their Venice foundry over 1957-58.  The T marked guns have been seen in the 18000 – 19400 or so serial range.

Like the prefix, the zero was also used to indicate warranty coverage or rather lack thereof.  As kits were to be assembled by the buyer, the factory only covered them for material defects.

Kit serials start appearing in the production range after 13000.  They disappear shortly before Great Western closed, at about GW21500.

The cruder kits seen over the 13000-19000 production range have only a serial on the cylinder frame.

The later kits, those with more factory spec machining and polish, will have number matching barrels, trigger guards, and back straps.

A few other short serial ranges are known.  The collector’s dilemma with these has been authenticity, as there seems to have been one or several brief, ‘unauthorized’ lots of Great Westerns assembled outside the factory.

This is a valid factory serial range with a few examples having been observed.   The  400__ coding bears some resemblance to ledger or accounting control numbers, and a first hand anecdote has corroborated that guns in this serial series were those built by employees for themselves with the GWA company’s permission.

Examples known are revolvers with F prefix and four digit numeric identifier, eg F1242.  The range is perhaps F1000 to F1250.  These revolvers have been seen by collectors on numerous occasions. When torn down, parts are often found to have serials from a mix of guns built at the end of Great Western’s standard serial range.   Fit and finish is generally deficient, and amateurish in ways greater than those production problems Great Western is known for during its ‘low quality’ eras.  A few nice F revolvers have been spotted however.

Throughout its operation and continuing through today, E&M (EMF) has retailed a complete line of replacement parts useful for building out a Colt single action type cylinder frame.  In the early 60’s E&M could source these parts domestically from its subsidiary, Great Western Arms, and this included the stripped cylinder frame component.  The authors have concluded that the F serial guns we see on occasion were built from cylinder frames rendered by Great Western, serialed apart from general production, and furnished to E&M for sale as a single component part.

In this 1962 Shotgun News ad, E&M sells a raw, machined frame with trigger guard and backstrap.  These are the ‘F’ serial Great Western cylinder frames. 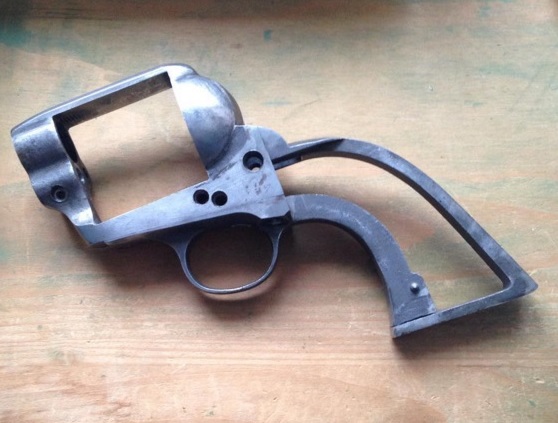 An ‘F’ serial Great Western frame and grip assembly set of the type sold by E&M in the 1962 ad above.  These are machined, but rough as cast with no polishing.  Buyers could buy a Great Western cylinder and barrel as well to build out these projects, and it seemed they often did.

With this understanding, the ‘F’ prefix probably merely stands for ‘frame’.

It’s to say also, these are not factory guns, though they were usually built out with surplus Great Western parts also purchased from E&M.  The F serial guns are parts guns, with fit and finish having depended on the skill of the assembler.

By 1962 ‘Great Western Arms’ had devolved into a low-volume side business for Moore Engineering and WJ Oliver Knife Co, two machining practices that shared industrial space on Alameda St in west Los Angeles.  The basic problem of the Great Western’s price against cheaper import competitors remained, but the Moore / Oliver effort seems to have done consistent business at about 500 units annually over two years.  Then Don Moore had a debilitating heart attack in 1963.  The Great Western Arms endeavor shut down immediately.

Multiple persons have shared the same basic anecdote, that when Moore’s shop closed he had perhaps a few hundred machined frames and parts to build them out.  Hy Hunter bought the frames and parts.  Hunter’s friend Rey Varney was employed to sort through it all, this done in the garage or maintenance building of the mini-golf course / fast draw range he operated in this same west LA neighborhood. Varney was able to put together some number of working revolvers (he was plenty qualified to do this.  Google shows he was granted a 1951 patent for a kind of fast draw target).   Former GWA service manager John McCormick was by now operating a gunsmithing shop, and he blued them.  When done, they were sold at Hunter’s retail shop in Burbank.

Actual number of these ‘Hy Hunter Great Westerns’ is probably far less than a ‘few hundred’ (and these are not at all to be confused with Hy Hunter’s lineup of revolvers imported from Germany). Several dozen is a more sensible guess (an advanced collector recalls McCormick stating the number was about 50).

One surviving example from this lot is known to collectors, a .357 with serial H20.  It is marked “HY HUNTER FIREARMS MFG INC, HOLLYWOOD CALIF” on the left side of the barrel.  On the right, it is marked “FRONTIER SIX SHOOTER”. 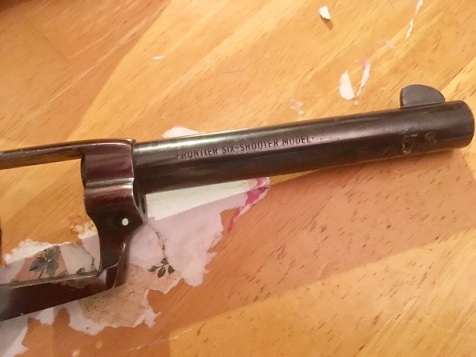 An earlier “Hy Hunter run” of Great Westerns is evidenced by revolver with serial 30008.  This serial is far outside the standard serial range, but exhibits features of 1956 manufacture by GWA (thin front sight, parkerized finish, type 2 grips).  The researchers have no explanation for why this revolver and its lot would have been made for Hunter. 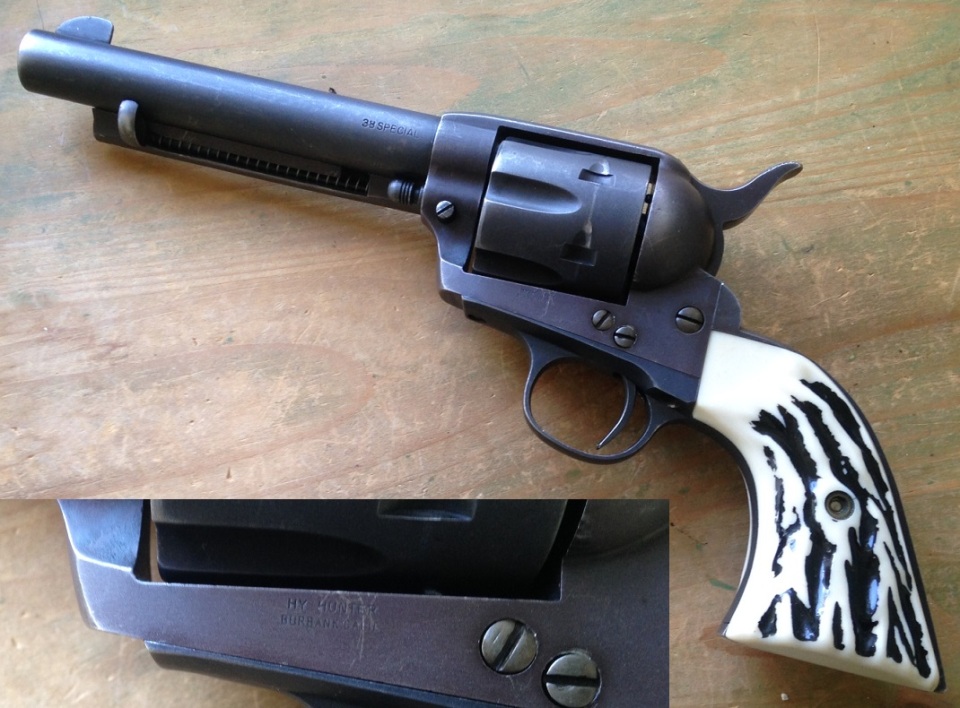 One example known, WA followed by 3 digits, eg, WA103.  Example is a revolver with no factory finish, akin to one of the kits.

Great Western Arms was struggling in 1960-61, and ads at the time show E&M engaging in various campaigns to liquidate revolver inventories. Briefly, E&M appears to have created a revolver line called “Walker Arms”.  Only one ad appeared (Nov 1960 Guns Magazine) before E&M abandoned the product line.  The example gun with WA prefix could be one of the few Walker Arms revolvers built, but this cant be proven unless a boxed gun with documents is observed by the collector community.

Standard production revolvers in the three digit range should have a GW prefix, so 3 digit revolvers without prefix constitute something different.   The “No-prefix, 3 digit” examples that have been observed are without factory finish or polish, and in this way do bear great resemblance to the first series kit revolver.   These also could have been machined, stripped frames sold by E&M, like their F frames.

Valid production ranges have been articulated above to the best of ability, along with some other serial ranges that probably don’t reflect Great Western’s best gun building efforts.  Guns from those ‘other’ ranges are nonetheless interesting and related to the overall GW milieu.

Revolvers seen with serials non-conforming to any of these ranges above should be evaluated with much caution, as they are probably not Great Westerns at all.  Rather, they are parts guns of mixed origin.

Some are no doubt Colts, and usually can be identified by the presence of Colt’s patent dates along with Colt’s rampant colt logo.

Identifying these is simple.  Remove the revolver’s cylinder and examine the rear cylinder wall.  Regardless of whether they use the Colt or Great Western style hammer, all Great Western’s will have machining for the Colt style recoil plate, and either the recoil plate itself or the Great Western firing pin assembly will be affixed there.

On most Italian six shooters up until very recently, there is merely a hole drilled through the cylinder wall to allow the firing pin to pass through and contact the primer.  This is to say, if examination reveals just a hole with no recoil plate, it’s a Great Western barrel on an Italian frame.